Hello and welcome back! From Vijay’s meeting with his fans, Chiranjeevi being named Indian Film Personality of the Year at the 53rd IFFI, and Jyotika wrapping up her portions for ‘Kaathal – The Core’, here are the biggest headlines from South cinema. 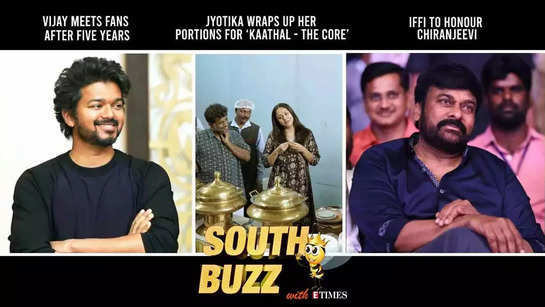 Monday is off to a good start with some joyous news coming in from South cinema. Kollywood movie buffs are exhilarated as superstar Vijay finally met them. On Sunday, Vijay interacted with his fans for the first time in five years, outside his Chennai residence and the interaction lasted for about 2 hours! Photos and videos of the actor are currently abuzz on social media. Vijay was sporting a casual look, decked up in a white shirt and denim pants, the actor recreated the flying kiss style he performed in ‘Ranjithame’ song, which undoubtedly cheered his fans.

While buzzing around in Tollywood, your bee heard that Megastar Chiranjeevi will be honoured with the ‘Indian Personality of the Year’ award for the year 2022 at the 53rd International Film Festival of India.

There is more good news to Telugu cinema, as SS Rajamouli has finally opened up about his next. The upcoming film is a globe-trotting action adventure on the lines of Steven Spielberg’s hugely successful Indiana Jones franchise, with superstar Mahesh Babu in the lead. The yet-to-be-titled film will reportedly go on floors in the USA, likely towards the second half of 2023.

Kannada film ‘Raymo’ directed by Pavan Wadeyar has made it to IFFI this year. The Ishan-Ashika Ranganth starrer will be premiered at the festival, and that definitely calls for a celebration!

Back in M-Town things are panning out pretty well, as Jyotika has wrapped up her portions for ‘Kaathal – The Core’ on Sunday (Nov 20). Mammootty too completed his portions a couple of days ago, and the makers will wrap up the shoot soon, and go into the next stage of production.

That’s all for today folks! Your south bee will be back tomorrow with your daily scoop on South cinema. Stay tuned!