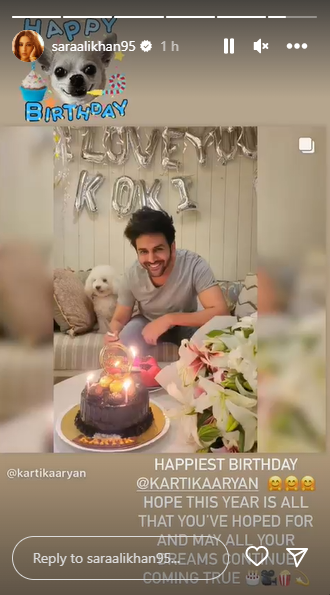 Re-sharing one of Kartik’s recent photos where he is celebrating his special day with his family, Sara wrote, ‘Happiest birthday @kartikaaryan. Hope this year is all that you’ve hoped for and may all your dream continue coming true.’ The actress also added a happy birthday sticker.

Sara and Kartik reportedly started dating while they were shooting for Imtiaz Ali’s ‘Love Aaj Kal’. Although they never came out in the open about their relationship, their social media PDA, dinner dates and outings spoke volumes about their secret love affair. The two parted ways for reasons best known to them.

On one of the episodes of Koffee With Karan 7, the host and filmmaker confirmed the same. “Last time you were on this couch, you made a public announcement that you wanted to date Kartik Aaryan and that did happen,” he said to which Sara also added, ‘Yeah’.

Meanwhile, on the work front, Kartik is awaiting the release of ‘Freddy’ co-starring Alaya F. He also had ‘Shehzada’ with Kriti Sanon and ‘Satyaprem Ki Katha’ with Kiara Advani. The actor has also been roped in for Anurag Basu’s ‘Aashiqui 3’, Kabir Khan’s next, and Hansal Mehta’s ‘Captain India’. Reports are also rife that he is a part of ‘Hera Pheri 3’.

Sara, on the other hand, will be seen in ‘Gaslight’ with Vikrant Massey and Laxman Utekar’s untitled film with Vicky Kaushal.