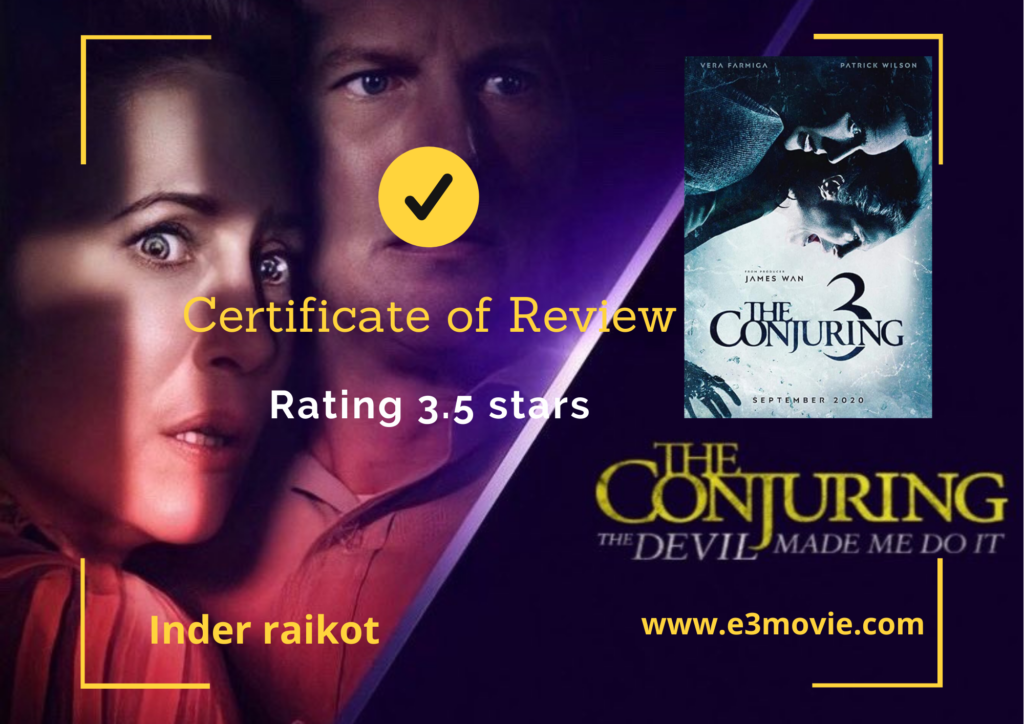 the conjuring 3 the devil made me do it review

The conjuring 3 the devil made me do it review

The Conjuring 3 Movie Review the devil made me do it movie serves as the third instalment of the “The Conjuring” film series, which is part of James Wan’s “The Conjuring Universe” franchise. Michael Chaves directs the movie with Vera Farmiga and Patrick Wilson reprising their roles as paranormal investigators Lorraine and Ed Warren.

The third film in this horror franchise follows Ed and Lorrain Warren played by Patrick Wilson and Vera Farmiga as they work to convince a court of law of the existence of Satanism. Based on a true story this movie takes you through a jolting scary beginning leaving you and the rest of the film with little to go from there. The plot of the film, and hence the writing leaves the film scrambled over all its paranormal setting.

Patrick Wilson and Vera Farmiga are back in their dynamic duo self-declared demonologist and clairvoyant wife. The characters really shine in this sequel being done wonderfully by both actors. Wilson plays his familiar restrained performance which suits the movie well. Though true credit is due to Vera Farmiga as she goes the extra mile giving depth and emotional peek in Lorraine’s strength and vulnerability.

‘The Conjuring: The Devil Made Me Do it’ has a change in directors from the previously established James Wan to director of ‘The Curse of La Llorona’ Michael Chaves. Though this switch definitely brought an interesting and nice change to the series. Michael Chaves brings a surreal experience to the camera keeping each scene alive.

Being the third movie in the series, ‘The Conjuring: The Devil Made Me Do it’ definitely sees some good production value. The audio mixing is top-notch making the thrilling scenes all the more exhilarating while the booming score keeps the movie nicely paced and kept together. The cinematography is immersive while the editing remains sharp causing you to stay on your toes for much of the film.

Made for the Devotees of the franchise or those who are interested in being scared by satanism and saved by the evangelical spirit. Otherwise, this horror film, while with better production and strong player leads, falls short from its predecessors due to the series overly harnessing the same ideas. With a questionable future for the series after this, ‘The Conjuring: The Devil Made Me Do it’ lands a 3-star rating.

Your Question and My Answers about The Conjuring 3 Movie Review.

What is the conjuring 3 the devil made me do it about?

Is the conjuring 3 safe to watch?

The Conjuring 3 Movie review define this is dangerous to watch, according to the Telegraph. It appears that watching The Conjuring 2 can get you killed or simply haunt your house. And while none of the scenarios sounds like fun, there have been a few incidents worth being worried about.

Is the conjuring the devil made me do it a true story?

Johnson and Debbie (now married) wholeheartedly support the Warrens’ account of demonic possession and have stated that the Glatzels in question are suing simply for monetary purposes. The event inspired the premise of the 2021 film The Conjuring: The Devil Made Me Do It.

Can a 13 year old watch the conjuring?

This review. It’s not like this movie has sex in it it’s just the scary, bloody scenes, and they barely curse, It’s totally fine to let your kids under 18.

Can a 9-year-old watch the conjuring?

Personally, I think any kids age 10 and up can watch it. But it just depends on how scared or mature they are. There’s some scary parts at the end

What is the meaning of R rating

What is worse than an R rating?

Rated PG-13: Parents strongly cautioned – Some material may be inappropriate for children under 13. Rated R: Restricted – Under 17 requires accompanying parent or adult guardian. Rated NC-17: Adults Only – No one 17 and under admitted.

The website’s critical consensus reads, “Well-crafted and gleefully creepy, The Conjuring ratchets up dread through a series of effective old-school scares.” Metacritic assigned the film a weighted average score of 68 out of 100 based on 35 critics, indicating “generally favourable reviews”.