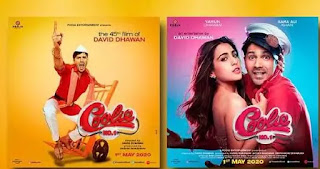 Coolie No. 1 is an upcoming Bollywood 2020 Indian Hindi-language comedy film directed by David Dhawan and produced by Vashu Bhagnani. A remake of the 1995 film of the same name, the film stars Varun Dhawan and Sara Ali Khan, with Paresh Rawal in a supporting role. Principal photography began on 8 August 2019 in Bangkok.